I was out taking photos of the Bollihope Carrs fell race today. I ran it last year, but this year decided to watch. For a short-ish fell race it has an impressive amount of route choice, and from my vantage point on the final descent it was interesting to see the deliberate and accidental variation. 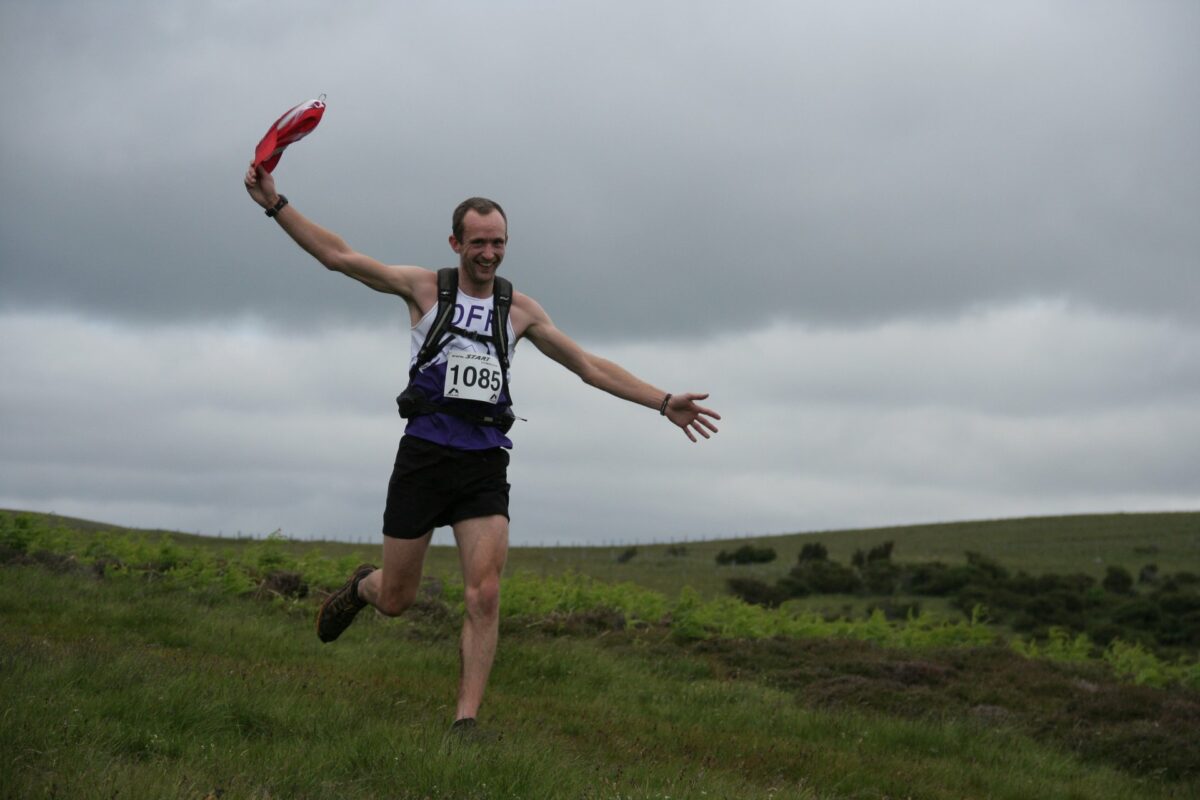 “Are you injured?” and “resting for a big event coming up?” were the typical questions that people asked me when I said I wasn’t racing today. It might, on reflection, have been easier just to lie than to say, truthfully, that I just couldn’t be bothered. I ran last year and enjoyed it but this year I wasn’t in the mood. Well not for the race anyway. I love the area and decided this year to have a gentle run out with the camera and see if I could settle down with a brew in a nice spot.

Logistically, helping, whether it be marshalling or just going out and taking some photos, is more complicated than racing. Racing involves turning up at least one minute before the race starts and being on the line on, or just after, the race starts. As I thought this through, I realised that if I wanted to get some decent photos, I had to be in my position before the fast guys went past, and, well, how do you work that one out? I started about 30 minutes before race start and when the little hand got to eleven found it the most unexpectedly weird feeling to know that somewhere behind me that some extremely fast runners would be closing down on me.

I’d chosen the ‘dip’ around Thistle Green a few miles from the turn to set up camp. It was exposed and I was glad I’d stuffed my rucksack with extra layers. On went the leggings and the waterproof. All in black. Still cold. I sighted the camera up the hill and found the wind kept buffeting my hold so decided to lie down in the heather and rest my elbows on a rock to get some stability. I also had to make sure that I wasn’t in the flight-path of the runners. The runners soon appeared over the top of the ridge like a scene from Zulu and for the next 20 minutes or so I was busy capturing the excitement. Paul was in the first ten in a tight cluster all negotiating the fast but technical grass and rock descent. Judging by the reaction of some of the runners I don’t think they knew I was there until they practically stood on me! I probably looked like some psychotic sniper as I lay in the cosy heather picking people off as they charged down the fell.

Then it all went quiet. The eye of the storm. It was just a matter of waiting until the leader got to the turn and headed back home. I collected my gear, and jogged further along the route before settling down at a promising looking beck for the action to begin again.

The beck crossing was interesting. Stepping stones or straight through? The stepping stones were dry, but uneven. Straight across was quick but involved getting wet feet. I could feel a spreadsheet coming on. Really, really surprised at the distribution of steppy stoners versus wet-feeters. You’d think it would be the fast guys that would favour straight through, and the slower runners would take the steps. But, in my considered analysis, there was no observable relationship between runner speed and route choice, although by my calculations you were anything between 5-15 seconds quicker running straight through the water rather than taking the stepping stones. If we let our x-axis be speed … you know, there’s a PHD in there I’m sure.

Anyway I got some nice action shots of the beck although no one fell over, which I thought was rather unsporting. One lady did fall when I wasn’t looking and when I ran over to ask if she was ok she gave me ever such a look that I was glad I hadn’t got a photo. I asked if she was ok and she said yes, which is just as well because one day someone is going to say ‘no’ and I’m going to be completely stumped. I’ve always just assumed it’s a rhetorical question. Paul was still around the same position but looking far stronger and more comfortable on the return leg compared to the outward run. Eventually the sweepers arrived with a runner who had taken a nasty fall on the way to the turn and had landed on a rock. A pointy one. Worst kind, the pointy ones. He wasn’t ok and was clearly in some discomfort as we all walked together back to the start, although it wasn’t clear whether he was more worried about his injury or what his wife was going to say when she realised she was driving home.

Two years’ ago when I last ran this race I had an disturbingly exciting incident in the first mile and had found myself several minutes before the back marker and perilously close to retiring. This year I expected things to be less eventful. We were on holiday in the Lake District so it was an interesting experience to be driving east to get to Kirkby Stephen. Arriving with bags of time in hand I was a little unsettled to see runners clutching their numbers and wandering about with a good hour still to go before kick-off. I checked that the Start Time was indeed noon and headed for registration.

Registration was in the Sports and Social Club. How do you know that? Apparantly you just do. In 2011 when I turned up in the Market Square I found registration by trial and error and following people who looked like runners. Top tip to anyone trying this; don’t follow people who already have a number as they’ve already registered – and the first thing everyone does after registration is go for a pee. So you’ll find the toilets, or a rough approximation of them, but not registration.

Once I’d registered I was gently guided to a table festooned with t-shirts. What was going on? Apparently this was the 25th running of the race and free t-shirts were being issued on a first-come first-served basis. The t-shirts have a picture of the Nine Standards and an abstract representation of the route. It was a really nice touch. A little later as we gathered in the market square the organiser said that we’d be starting a few minutes late due to the large number of entries. No matter, as this fell race out of any race I’ve ever done must have the most convenient public conveniences I’ve ever known, and many runners took the opportunity to wander the 5 yards from the Start to the loos. Well, it’s something to do.

The organiser announced that we had a record-breaking field of 166 runners and a few seconds later 166 runners were trying to squeeze down a narrow staircase, through an alleyway then over a footbridge before things opened up. Roberta was here so I paused to put on my happy face, then started moving. I was feeling quite good and optimistic to doing a half-decent time. 166 runners; a lot of them would have hangovers and be once-a-year runners so maybe I’d get a decent position for once.

Shoe choice is tricky in this race. Half of it is on road, a bit is on trail, and a chunk is in on very squashy stuff. I’d opted for my mudrocs having read John Duff’s report from last year, and I think it was the right choice. The Nine Standards appear quite quickly, and appear to get close quite rapidly, but just when they seem to be tantalisingly close, the going gets very soft, and the last mile up to the summit is hard going, especially as by this time the Fast Guys are hurtling back down in your face. I ran hard and steady, out and back, and as I closed down the last few miles I remember thinking that this was an eight mile race, and the distance was beginning to make itself felt.

Over the bridge, up the steps, and the final squeeze through the alleyway to the finish. I leaned against a wall trying to get my breath back, before turning to watch what I’d hoped would be a gratifyingly large number of runners crossing the line behind me. I was in for a shock. This was a quality field – 10 more runners and not many more minutes later, everyone was home. I looked at my time in horrified astonishment; despite running hard and steady, I was almost three minutes slower than two years’ ago, when, much fitter, I’d managed to claw back more places and time after a scarily bumpy start. Must do better.