I did the first ever Mad Dog and it was great. The thought of being a Mad Dog Ever Present appealed and for a few years it was all good, but holidays and diary clashes intervened, so now I have to settle for being a Nearly Ever Present. Still, it’s been great watching this fledgling event grow from nothing to one of the UK’s most popular 10Ks in just seven years.

My training lately has been lots of long and slow as trying to do the short and fast thing doesn’t really agree with me. It’s too much like hard work. So as I stood in the Dalmatian pen (not as fast as a Greyhound, but faster than a Husky) I knew running 10km wasn’t going to be a big problem. It was running it fast that would be the hard bit.

Away we went into the fine morning. Conditions were good. Congestion was as expected and not too bad, and it thinned out pretty quickly anyway. I was in no rush and settled down into a comfortable groove. This is a good race for spectators with opportunities to catch the race in more than one place if you do your homework. I spied Roberta standing on the pier where she, along with many other spectators, were spellbound by the entertainer high-fiving runners as they past underneath. It was Elvis. Possibly the same Elvis you see at the bus-shelter towards the end of the GNR. Or a close relation. And my word, what a talent! A performance never to be forgotten. Music was a big theme this year. It always is for the Mad Dog but this year the performances were exceptional. You get to see the fantastic steel band twice, once on the way out, and again in the last few kms.

At the half-way point I was feeling pretty comfy and stepped up the pace a little. The route now meandered around to pass back under the pier at a different point where the Merseyside Rock Choir brought some real class to the party. I was feeling pretty good and bounded on although I was tempted to stop, look and listen.

With about 3km to go I kept nudging the needle careful not to blow it and throttling back gently when I felt I was overdoing it. Passing runners steadily to the line I gave a well-judged push in the last few hundred metres, slightly alarmed that the Finish banner said Start, and hoping that the Finish wasn’t round the corner back at the school. It wasn’t and I was pretty pleased with running a text-book negative split. The last time I did this race I was pretty dismayed to be well over 50 minutes, and not having run a sub-25 parkrun for as long as I can remember I wasn’t expecting miracles today. So when the text came though of a chip-time of 48:35 I was a very happy dalmatian.

I always take my running kit on holiday. Doesn’t matter where. There’s always the chance of a run, or even better, a race. I nurture fond fantasies of running a race in some far away exotic place in my Striders vest and writing an ever so nonchalant, do this sort of thing all the time, race report. However, given some of the parkrun tourist reports we’ve had lately you’d have to go intergalactic nowadays if you wanted to win the accolade of Strider who has raced the furthest away from Durham.

This holiday was no different. I packed my kit. But this holiday was a biggie – we were going to a game reserve in South Africa for a fortnight, so, realistically, I should’ve realised that the chances of a training run would be limited. Or at least, quite literally, short-lived. Sure enough it became immediately clear that a jog round the local bushes would probably result in meeting some scary wild animals. And I’m really not very fast. I think a Cheetah would have the edge.

Nonetheless, despite a series of lacklustre parkruns and a two week hiatus in my running I turned up in Southport for my 4th Maddog 10k, optimistic that I would, despite all the evidence, pull something amazing out the bag. I had also, cunningly, decided to avoid the whole park and park-and-ride shuttle-bus stuff by cycling from my parents-in-law’s flat to the race start. I arrived nicely warmed up and stress-free. The race started right on schedule and I settled in the shelter of the congestion, satisfied in the knowledge that there’d be plenty of time to put the foot down later when I got into my stride. A sharp left onto the seafront and straight into the wind. I tried to remember what Allan and Ian said about cutting into the wind on the track, but whatever I did just seemed to be met with a squally blast. Plus my nose was running and I was paranoid about how to address that particular issue without causing a major incident.

The 3km marker appeared and I took a glance at my watch and got a nasty surprise. I’d been prepared for a slowish time but assumed I’d still be comfortably sub-50. But now for the first time in 5 years it was looking like I was heading for a 10k time where the first digit was a 5. This was really most disagreeable. I tried to lift my pace a bit, but my pace was not for lifting. Still, when we hit the 5km marker we would turn round and the wind would hit us in the back. Sure enough, it was like cresting a summit on the bike and free-wheeling. I slipped into the big ring and increased the pace. There were lots of bands and music this year and I began to feel a bit more upbeat as I hoofed it back to the finish, confident that even if I didn’t PB, I would at least be sub-50.

Across the finish line and a glance at the watch. No, that couldn’t be right. That couldn’t be right at all. There had to be some mistake. I checked again: 52:29. I did a bit of that rueful-headshaking routine that you see top sportsmen doing, as if to suggest that there was some other sinister shadowy reason why my time was what it was. But it didn’t change anything. It was still there, beautifully pixellated. Nearly 5 minutes slower than last year, and a 5-year PW. 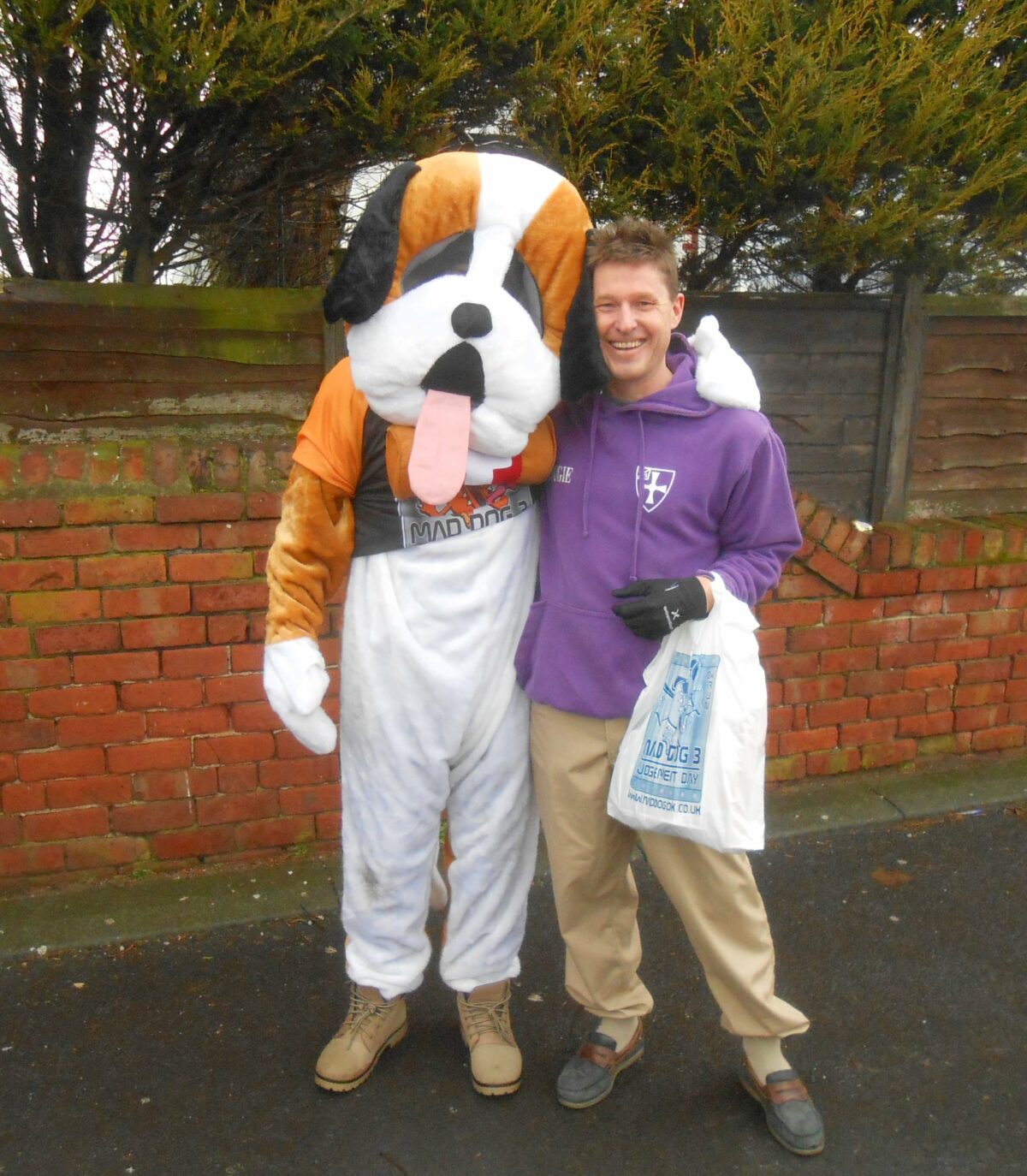 I closed my eyes, drew back the curtain, to see for certain, what I thought I knew. Yup, the weather was minging. I was just so not in the mood to do a fast flat PB hunter’s 10K that I knew would be neither fast, nor a PB. I PB’d in 2011, then again in 2012. It wasn’t going to be three in a row.

This was the third year of the Mad Dog and its most ambitious yet. Larger field, more road closures, and some other stuff. The biggest change was the introduction of park and ride, or, park, queue and ride, to give it a more accurate description. It was bad luck that the weather was so cold and damp and the organisers discovered in the morning that the buses were not allowed to go the quick route from carpark to the start so the queues to get back after the race were long and shivery. In a neat bit of PR one of the marshals walked along the queue apologising for the delay, chatting to the maddogs, listening and getting feedback and promising to get the glitches sorted for next year. I wasn’t too worried – we didn’t have to wait too long – and Roberta and I were both veterans from the Edinburgh 2009 marathon where the shuttle buses were hopelessly inadequate. So a 20 minute wait for a bus was no big deal, and it’s not as if you couldn’t walk to the park and ride, and many did. It was probably only 20 minutes. Might do that next year.

The park and ride delays meant the race started half-an-hour late. Bad news on a cold damp morning, but not that bad. Most of us just sat in the nice cosy school corridors of Stanley School sipping coffee and waited until it was time to go. The Crazy Pups had already started and now it was time for the Mad Dogs. Signs advised us that Pedigree dogs should assemble near the front, but I joined the Mongrels near the back. I sniggered guiltily at all the signs advising us to behave while off the lead and not to sniff other dogs bottoms. Can’t beat a bit of smut.

They’ve made a few subtle but clever course changes. More road closures and imaginative route choices make this race a rare beast; a fast PB road race that is also an interesting course. Along the promenade, past a Steel Band (that’s new), and then the tell-tale sign that the race is really getting big. An Elvis. An Elvis singing “You ain’t nothing but a houndog” to those in suitable fancy dress. The last 3 km rejoined the outward course around the Steel Band point so we got another blast from them (they were great) and a long fast finish which was the same point as the start. Even in its far larger form (1700+ finishers) there were still space to run.

I didn’t PB, but I was very happy with my 48:13 time, which was a lot faster than I expected, or deserved. It had been a good fast hard race and I love the excitement of running in a pack and still having space to overtake. But there was something missing. I showered, had a coffee, rumaged through my goodie bag, but something wasn’t quite complete. Where was he? I had my photos from 2011 and 2012, and, aha – there he was! Now I have one from 2013 too!