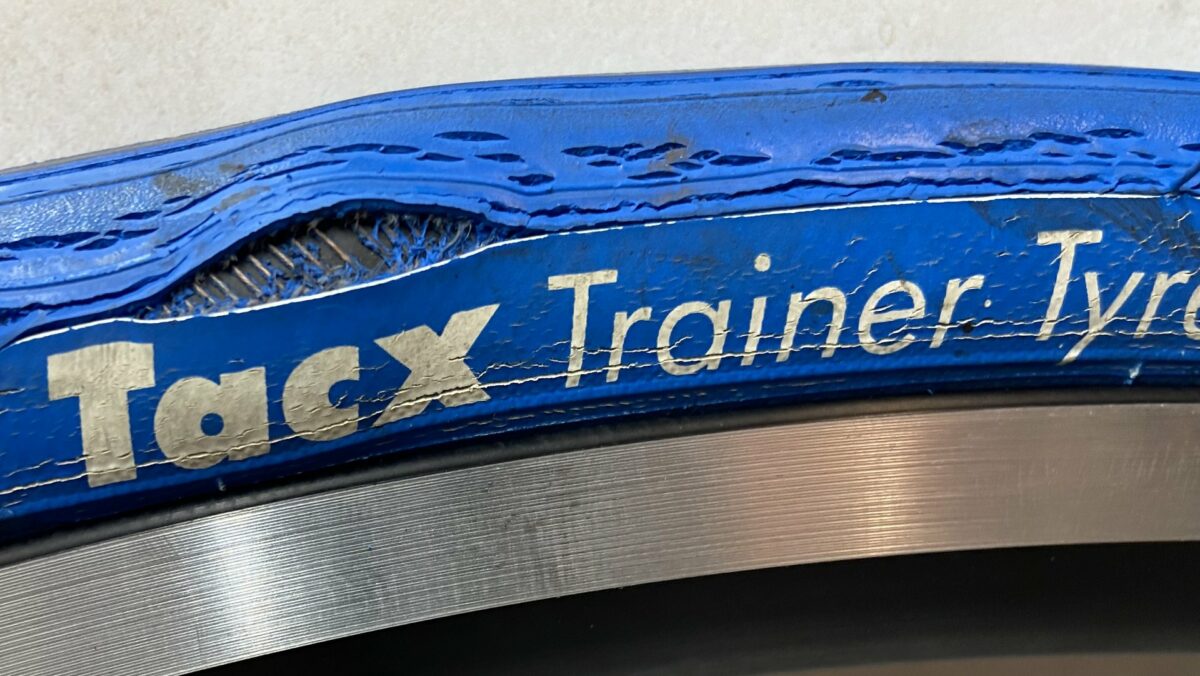 So there I was, plodding up some pass in the Czech republic, slogging steadily through the middle of a Rouvy server, minding my own business, when BANG! A mechanical! On a smart trainer. A blowout.

I hopped off my bike and moved to the side of the road. Fished out the tyre levers, which had conveniently appeared on a nearby workbench, and had a look at the problem.

I have my doubts about the Saris M2. I miss my Tacx Vortex. It’s a pity that it fizzed and sparkled when I tried to fix it. It’s pretty much unfixable now. It’s now a perfectly functioning not-smart trainer though. The Saris M2, with its scary clutch knob, makes me nervous. So much tyre squashing involved.

Moving to a dedicated trainer tyre was definitely a good move. It’s quieter and smoother. Not sure about the battery life though. Is it connected to the trainer? Is it a co-incidence that since changing to the Saris M2 that the cracks have begun to show in my trainer tyre?

On the surface of things I certainly seemed to have a smoking gun. But I’m a bit puzzled. Admittedly the tyre is not looking its best, but I was surprised it had resulted in such a rowdy blowout. I decided that it was just a fluke, and the tyre had a bit of life in it yet.

I wasn’t wrong. There was some life yet. Another 12 minutes to be precise. Then there was another loud bang, not dissimilar to the first one. Luckily I had another nearly new tacx trainer tyre, I just had to find it. I was nearly at the top of the pass too. Annoying.

The new tyre is on, and today I managed to complete the ride without a mechanical. But I’m really, really not sure about the Saris M2. Surely a tyre was never designed to be quite so squashy …

5 thoughts on “the tacx tyre and the Saris M2”