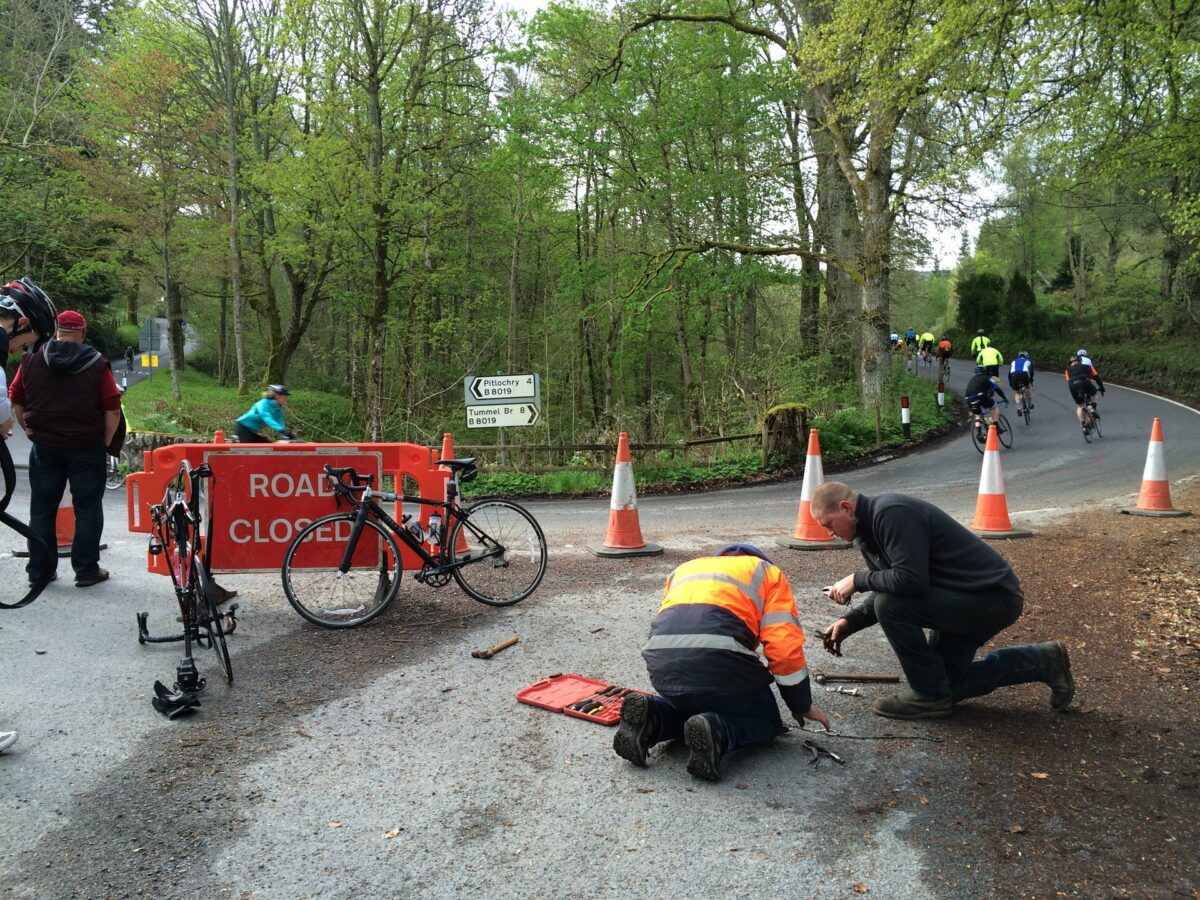 Last year I rode this event, as well as other Etapes, on a 30-year old aluminium Alan bike, with 30 year old equipment, including the drive train. I did ok but wondered how much better I would do on a modern bike. So this year I was riding my new Hoy bike, and I had a nice position in a fastish starting pen. Just before the 5-mile marker I was comfortably wooshing along in a very nice peleton where some nice chaps at the front seemed to be happy doing all the heavy lifting. This was great!

Around a sharp corner, down the gears, and attack the hill. Woops – a bit of a crunchy gear change – but I don’t think anyone noticed. I’d geared down into what appeared to be a phenomenally low granny gear and was spinning against nothing. Nothing, indeed, was what I was spinning against. My chain was lying like an angry malevolent metallic snake in the middle of the busy road and I only just managed to coast to the roadside before grinding to a halt. Huddling in to the roadside for dear life as the steady stream of riders flew round the blind corner I had the more immediate problem of getting across the busy road on my cleats to a place of relative safety. The marshall took his life in his hands and dashed over to retrieve my chain.

Not a great start. I chatted to another cyclist who, surprise surprise, had also got a snapped chain. “You put in all the training”, he said, “and then this”. The marshall had a toolkit but the chain-fixing-tool was playing up. And the cool Mavic guys on motorbikes were ahead of us so couldn’t come back ‘upstream’. “I’m afraid it’s just a waiting game”, the marshall said. The reality began to sink in. I’d been looking forward to this for months, and here I was, under 5 miles in, and it wasn’t looking good. If I couldn’t get moving before the sweep vehicle came through, it wasn’t going to be worth restarting, and I was beginning to get cold.

But a guardian angel appeared in the form of a spectator who had a look at my bike, then had a brief conversation with the marshall, then disappeared. When he came back he was carrying two hammers. This was looking promising. The ultimate tool of desperation – a big bloody hammer! And he had two, so double the hope. He gave me an inquiring look and said, “I’m not insured to do this you know”. I invited him to go ahead, and hit it as hard as he liked while I averted my gaze. I’m not sure what happened next, some sort of black magic I reckon, but when I looked again they were giving a satisfied “good as new” nod, and my chain was back. I thanked the guy with the hammers and joked with him that I would be giving that Chris Hoy a piece of my mind, to which he replied, without a trace of irony, “Who’s he then – is he the guy that serviced your bike?”. Well in a way, I guess he was.

25 minutes after crunching to a halt, I was back in the race. But my heart really wasn’t in it. Not for a while anyway. I gave myself a bit of a talking to and got down to business. Soon the timed Scott sprint appeared and I gave it a go, only to be thwarted again by the slowcoaches who ride 4 abreast across the road chatting to each other. What bit of the word ‘sprint’ is it that they don’t understand? I put my head down and gave it my best shot, aware of a thumping in my tummy. That’d be my thighs saying howdy to my tummy. Too much beer and chocolate! Damn. I thought I’d solved that problem the previous evening by putting my saddle up. Not exactly the same as losing a bit of weight, but it relieves the symptoms, if not the cause. Schiehallion came and went and unexpectedly dry roads meant an awesomely fun descent. Then a steady brisk ride in calm conditions back to Pitlochry.

I compared my times to the previous year and was chuffed to find I was faster on the King of the Mountains, and, surprisingly, the Scott Sprint, thanks due to fine, calm conditions, but mostly thanks to the marshall and unnamed hero with the hammers who gave my bike a bit of a talking to. I owe them a huge debt of gratitude and a few pints of heavy. If it wasn’t for them my race would’ve been a washout.