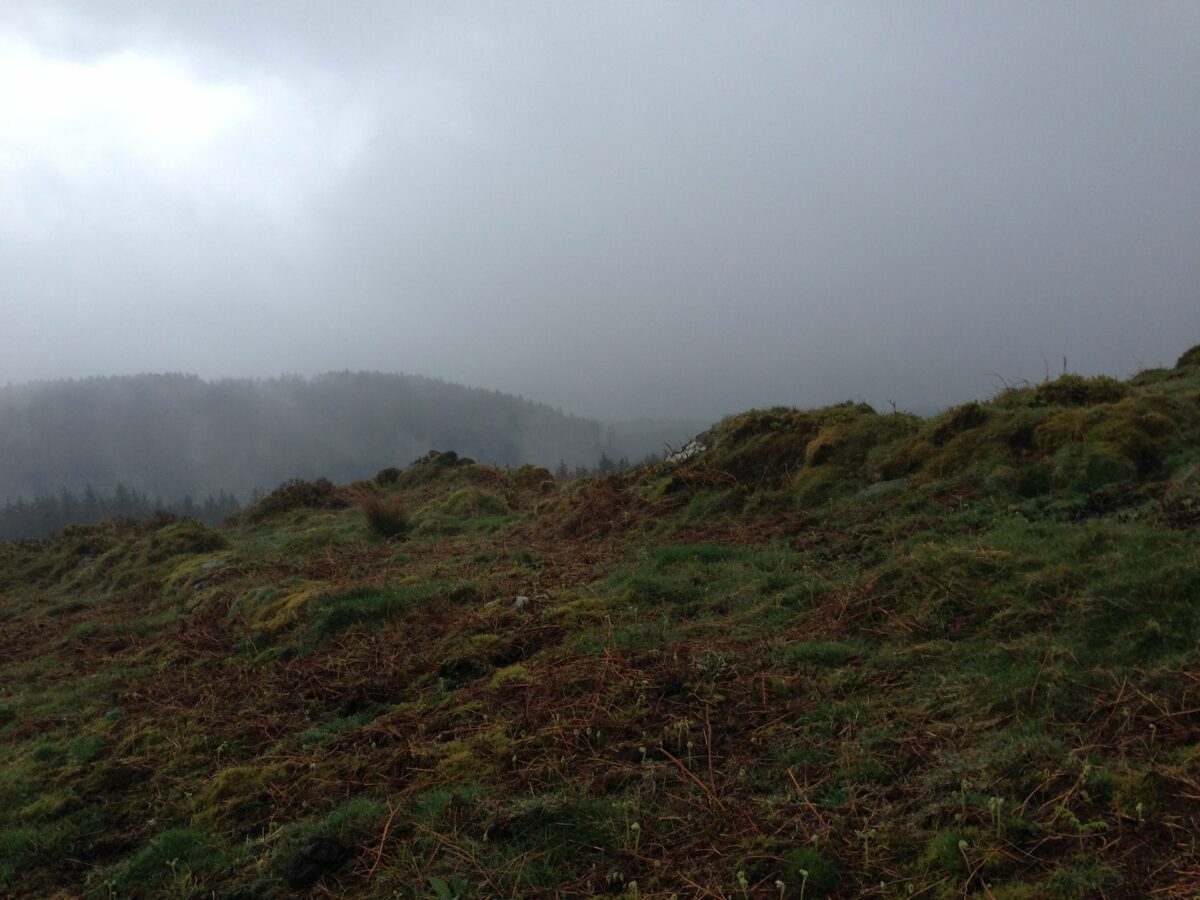 After a long, long, slow drive up a forest track, we parked at the side of a tree. We had been warned though. So we’d allowed lots of time. And so as we trudged through the drizzle towards the Start of the Walk to the Start, we had plenty of opportunity to take chirpy selfies. Truth be told, we were both a bit jittery about this foray into the big time. Competing in a national event at a national level.

Whatever that meant. I couldn’t give Roberta much advice as it was all new to me too. The comforting colour-coded courses were gone, and I was competing in my class of M50L (Course ‘3’). Whatever that was.

A parkrun of walking later, we arrived at the Assembly area. Roberta glanced longingly at the portable loos but there simply wasn’t time. We had a further 400m to go before we got to the Start itself. A couple of minutes to spare before Call-Up. T-4 minutes and you’re called forward. T-3 you can pick up control descriptions. T-2 you can look at a blank map, and then, T-15 seconds you can pick up your map, but not look at it, and then … well I’m not sure about the next bit. I do know that I picked up the wrong map. I mean, a W is just an M upside down isn’t it? And if there happens to be a W50L course … I asked the lady next to me what was going on? Are you on a punching start? She asked. I didn’t know. I know what that means now, but not then. So I just said yes, (wrong), and, well the details are unimportant. Realising that I had the wrong map, I hunted around the bins for M50L and eventually picked up my map. But by this time my ship had already sailed, and the official assumed I was in the next wave, and was picking up my map early. On the ball for procedure – not so hot on the facial recognition algorithm. I explained, he demurred, and off I went, a few seconds late. Looking for the Starting punch. Except it didn’t exist, because it wasn’t a ‘punching start’. Ahhhhhhhh…..

Anyway, off we go. Keep the hied. Keep calm. Don’t panic. A tricky course, an error here and there, but nothing disastrous. Nothing that couldn’t be salvaged. Recovered. Looking good, steady as we go …

And so on to Control 9 (out of 22). A boulder (West Side). Didn’t look too difficult. Jog down the path until it jinks to the left, then contour round to the right, hitting the marshy bit in about 100m, and it should be, right, there. Nope. Ok, loads of people around. Lots of smaller boulders, check, nope. Ok, pan out, look for features, relocate. Ditch found, on map? Hmmm, bush, boulders, scrub, marsh. It doesn’t fit. Ok, relocate. Up to the wall. Find crag, compass bearing, pacing, down the marsh, but there’s no marsh. Something’s not right. What the hell is wrong with this picture? Orienteers in the distance have found a control. That couldn’t be it. It’s in the wrong place. Run over. It’s not. Time was haemorrhaging away.

Ok, deep breath. Back to the path I attacked from. Path junction crosses stream. But no path junction crossing any stream here on map. Lots of other orienteers confidently attacking from here, to controls unknown. What did they know that I didn’t? What were they seeing that I was missing?

A massive wave of despondency overwhelmed me. I was not wearing a watch or GPS but I knew I’d easily lost 20-30 minutes hunting for this control. I walked back up the path. And I keep right on walking. All the way back to the Finish.

Had I known quite how unexpectedly wretched I would have felt about this decision I would not have given up. Although I’m prone to succumb to occasional self-indulgent angst-ridden post-race analysis I’m usually pretty philosophical about bombing out. Not this time though. This was a bit different. I’ve looked at this control so many times that this section of the map is burned on my memory. I can see several ways in which I could have relocated and attacked again. This was a survivable crash. It was recoverable and I had the skills to do so. Sure I would’ve ended up with a dismal time, but I wouldn’t have felt as dejected as a DNF. You live and learn.