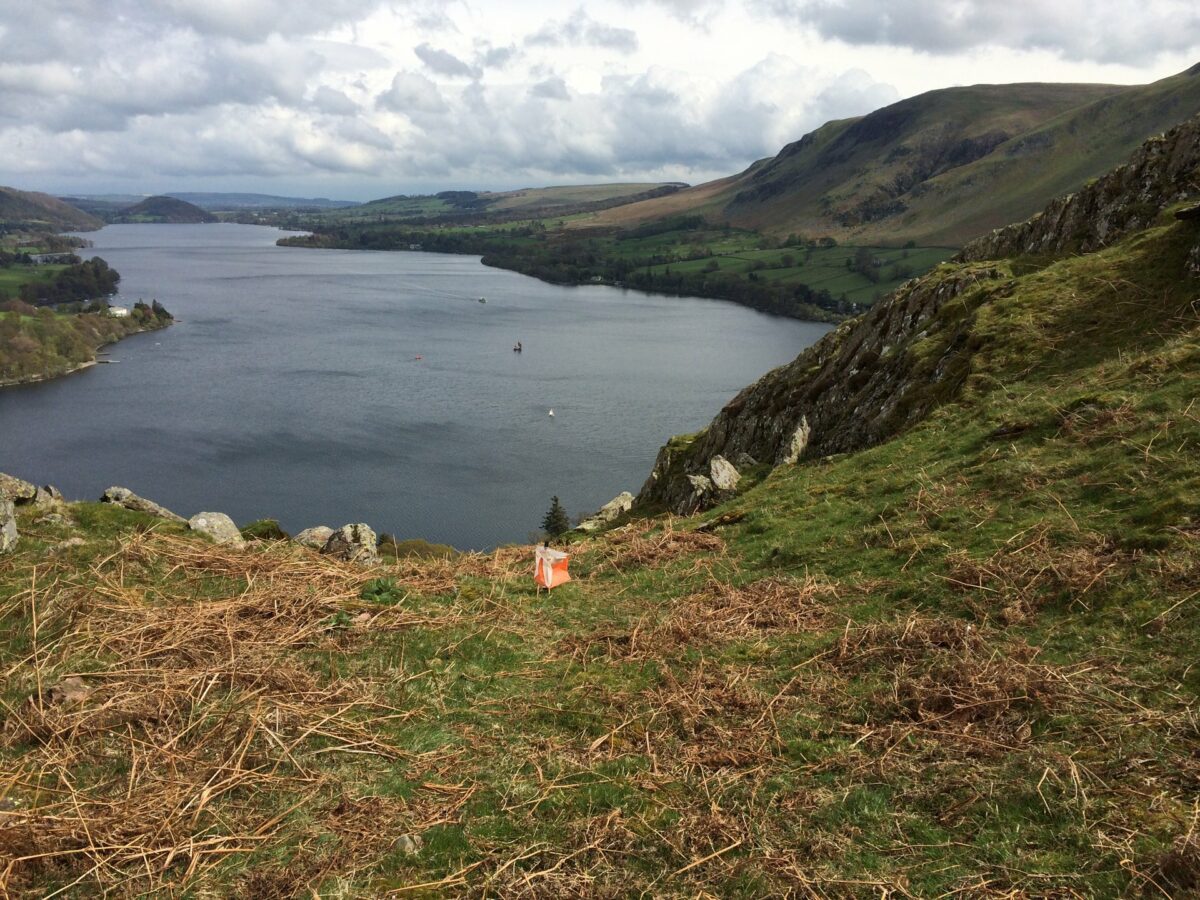 One of the nice things about orienteering is that it can take you to places that you wouldn’t usually go, and one of the nice things about the Border Liners orienteering club is that they run regular “come and try it” events. So yesterday found me and Roberta driving down a long cul-de-sac on the east side of Ullswater to Hallin Fell. We thought we knew the Lakes quite well but we didn’t know this bit. Around a hairpin, up a hill, and into the sun. We drove off the road and about 6 feet up Hallin Fell itself before the car decided that was enough of that and stopped. We were parked.

We registered and I asked to do the ‘green’ course – the longest one available that day. That was fine, it’s just that they had no green course maps left. This is not unheard of when an event proves popular and there have been only so many course maps printed, and in these situations you just wait until the next green gadgie finishes and you nick their second hand map. We headed for the Start which was a bit of a climb up the fell itself. The Start was about as informal as it gets. There was no one there. When you were ready to go you just dibbed your doodah into the doubrey and doddled off. Roberta strode away on the Orange course, me on the Green.

It had turned out into a fantastic sunny day and this had to be one of the more dramatic locations I’ve orienteered in. Hallin Fell is set above Ullswater with views right down the lake, and despite not being particularly high it has a real sense of drama. Despite never threatening the podium I still tend to hammer it as best I can round an orienteering course but today I did pause for a few seconds just to stop and stare. It really was quite a place.

I did ok, as I often do, until I made mistakes. Two biggies today. The rock beside the path on the bend that I thought I was at, was remarkably similar to another rock beside another path on another bend that I should have been at. So when I pounced on my control, it wasn’t mine at all. It was someone else’s. Jings, I said (I’m paraphrasing), and soon realised my mistake. A few minutes lost, and a few more some time later when I decided that a cairn that I passed was too small to be marked on the map and that my cairn was the big one ahead. It wasn’t.

On a short course like this there isn’t much opportunity to recover time from errors such as those, and I may have actually got a half-decent position if I hadn’t messed up. Roberta found the navigation ok but wished she hadn’t left her Leki’s in the car as the steep slopes were a bit tricksy. We left this gorgeous tiny corner of England to head for Southport, and to check our schedule for tomorrow’s trip to Burnley.