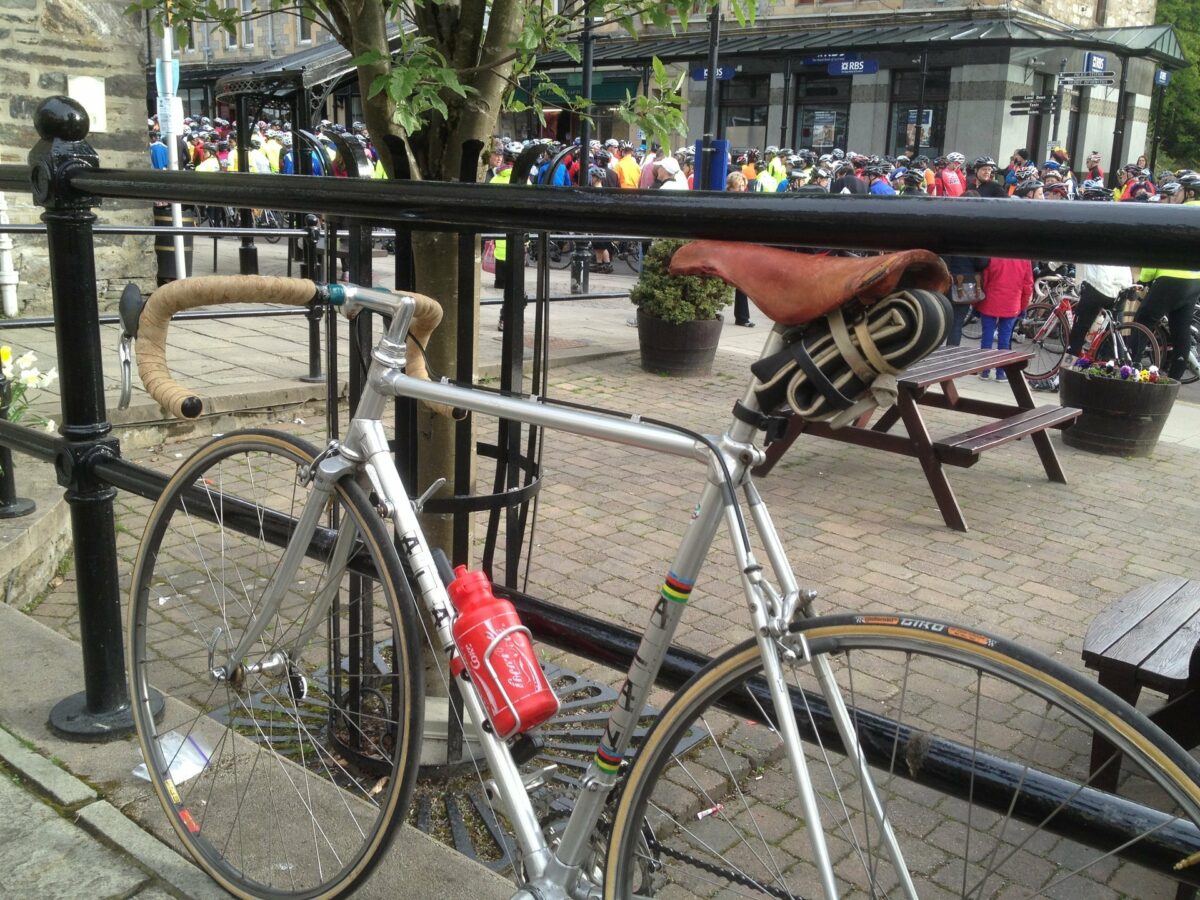 Yes, it’s true, in case you’re wondering. The Etape Caledonia is indeed a walk in the park compared to the Etape Pennines. That’s not to say it’s easy, it’s just not as hard or as brutal as the Pennines.

We were staying about a mile from the Start. ‘Downstream’ unfortunately, which meant that I wasn’t sure how early to get out of bed and make my way along to the Start. The instructions suggested ‘at least an hour’, which meant there was potentially a lot of hanging around time shivering in a Pitlochry dawn waiting for my time to go.

In the end I could have left things much later and found the pavements pretty clear even with the early starters already well on the way. I turned up with almost an hour to spare and settled down to wait. This was a very smooth operation; some wifie on a big chair they’d borrowed from Wimbledon was barking instructions to riders, while boards were held up indicating which wave should be where.

I was in wave AA and not for the first time I wondered whether I was the only person in the universe who didn’t make something up for their estimated finish time. Looking at some of the generously clad riders who shuffled past in the early waves I did suspect I’d be seeing them again before the finish. Finally it was wave AA’s time to go! The final wave! I clunked into my pedals and felt a tingle of excitement as we followed the mass of riders north out of Pitlochry.

I’d expected to be frustrated by rider congestion but it wasn’t that bad. I’d sit on a wheel for a while, rest, then bridge the gap to the next group. I tried working with riders but nobody was playing. Time and time again I’d follow a wheel, and when the rider peeled away I’d take a session, then move aside to discover they were not in my slipstream. It was a bit frustrating although I did catch the wheels of riders 298 & 299 for a few miles and belted along in their slipstream until Tummel Bridge where I had to let go. Shortly after a rider alerted me that my reading glasses had dropped out my pocket and I decided that the responsible thing would be to go back for them in case they went through a tyre. I pulled over, turned round, faced back down the narrow single-track road at the steady stream of cyclists coming the other way, and thought, nah, the glasses are staying where they are. They’ll go nicely with the tacks and screws.

Approaching a feeding station a marshal with a megaphone bellowed clearly, “Feeding to the left; straight through on the right”, which apparently means, stop anywhere and wander about chatting to your mates. Having tetchily negotiated the obstacle course I settled in with a loose bunch and felt eyes upon my bike. A voice said with a hint of incredulity, “Are they tubulars?!”. Not sure whether to be proud or embarrassed, I said they were, the same ones that had done the Pennines, although they’ve roughed it up and down to Gateshead a few times since then. I was given a run-down of the course and the upcoming Schehallion, of which I was a little apprehensive, and then it started to rain.

I’d tried to go for a time in the Green Jersey timed section but had been thwarted by people riding four abreast and talking about last night’s telly, but I was up for the King of the Mountains. Schehallion. The red mats appeared and I put the foot down. A minute or so later it occurred to me that I had absolutely no idea how long Schehallion was. 1 mile? 3, 5? Perhaps I should’ve done some homework. I tried to pace my effort on where I imagined the finish might be, which in the end came sooner than I expected. Well if that was The Hill, it could have been far worse. A nice fast descent now, although not too fast as it was raining quite heavily now and I wasn’t riding on the grippiest tyres in the world.

On and off solo riding until about 20 miles to go when two riders passed who were clearly working together. I thought, I’m having some of that and leapt on the wheel. Initially I let the working rider in front of me, but after a bit of non-verbal communication I made it clear I was willing to do my bit. They looked at me and the bike and presumably decided to risk letting me mix in and help out, and then followed an absolutely fantastic 5 miles or so of fast riding. It was good old fashioned close-formation chain-gang stuff and we overtook other riders as if they were standing still. I knew I couldn’t keep it up but I intended to work with these guys and beat the clock as long as I could. We charged through a feeding station and during one of my spells at the front I looked ahead and was sure I could see someone driving a Chaise Longue. Sure enough, it was Durham Tri’s Ian Mackenzie, more commonly seen with Allan Seheult trackside on Wednesdays, riding on a recumbent. I managed to shout a few words of encouragement as we flew past at a speed I knew was unsustainable. Another mile or two and I was burnt out. I thanked my chain gang for the lift and took my foot of the throttle.

The final big climb was a cheeky little number in the last 10 miles to Pitlochry. I was pretty tired but encouraged to see my name splashed on the road as I hit the last hill. Soon we were in the outskirts of Pitlochry and a spectator shouted, “800 metres to go. If you’ve anything left, give it all NOW!”. I got very excited. I had something left, and I gave it all! Sadly with 600 metres still to go we turned a corner and there was a long drag to the finish and the waiting crowd. I’d given my all and it had all gone. I was knackered and feeling slightly foolish as I slowed down for a rest at the very time I should have been sprinting for home. But the line came quickly enough and the race was over. As I crossed the line I heard the commentator say that there were just under 1000 riders still to finish. Given that I started in the 27th and final wave I reckon I must’ve passed most of those in the last 5 hours. I thought it was busy.

Overall compared to the Pennines I’d have to say I prefer the Caledonia course. The hills are gentler so it’s possible to get into some sort of rhythm, and you can fly down the descents without having to touch the brakes every few seconds. Despite the big field there was rarely a problem with congestion, although next year I’m going to get into an earlier wave and see if I can sit on a few more wheels.