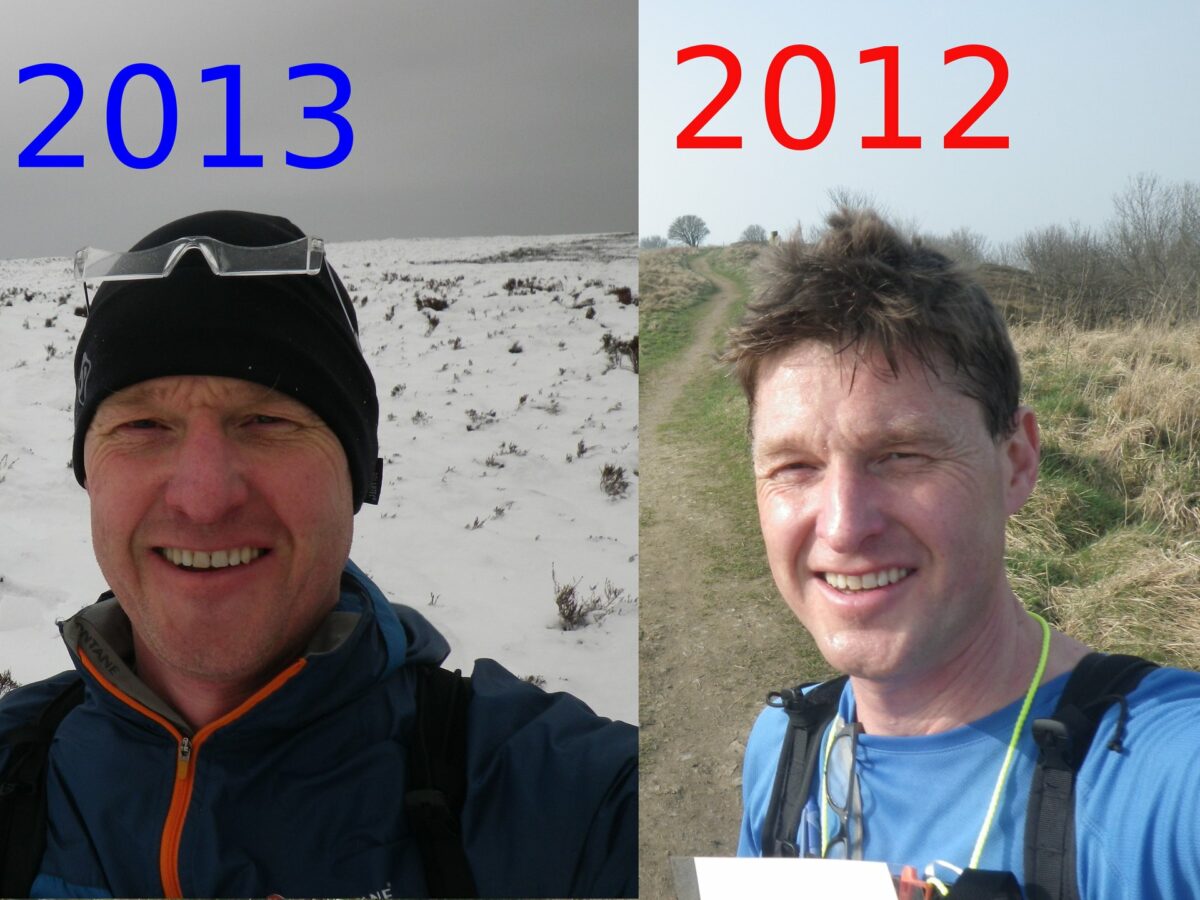 It was good to see a big turn-out for the 30th running of the Cleveland Survival especially given the uncertain weather. While many events were being cancelled the Cleveland Mountain Rescue website drily observed that the weather for Saturday looked ‘interesting’.

The weather wasn’t too bad in the sheltered village of Swainby as we were started in little clusters some time between 9 and 10 am. My tactics were slightly different to last year; I didn’t bother marking any checkpoints on my old paper OS map of North York Moors (West) knowing that there’d be bags of time to do it on the hoof.

As it was, navigation was very easy. Too easy. As many of us discovered as we switched off and followed the crowd. On the way to the third control I followed a bold track that sold itself as the green dotted line on my map. It eventually became apparent it wasn’t and a bit of off-piste correction was required to get back on course. Not one to learn from my mistakes I followed the herd to the next control and it became clear that many of us were indulging in collective navigational laziness and a couple of unnecessary barbed-wire fences later I decided it was time to start paying attention.

The organisers had cleverly designed the course to be on alternating sides of a large folding paper map on a windy day and being used to small waterproof orienteering maps that I could shove down my pants I was struggling with the billowing paperwork. Perched outside in the pouring rain, trying to make myself a sail, I floated upwards to the exposed checkpoint of Swainby Shooting House on Rye Head. The traverse from there across Whorton and Black Moor to the next check point at Head House was barren and exposed. I’ve been out in some pretty wild conditions and had everything from hurty knees to hurty nadgers, but today I had a hurty face. I felt I was being sandblasted with hailstones as I jogged steadily across the moorland track.

The 4×4 bristling with antenna appeared like something out of Ice Station Zebra as I checked in and moved on to Chop Gate and some hot chocolate. Very Swaledale. From here there was a long jog to Cold Moor Cote, then up onto the Cleveland Way. Ho ho! I’d wondered if this might happen. I realised at once who the ‘other’ runners were, but some Hardmoors and some Survivalists were, I think, slightly confused. Our checkpoints were easy to spot; they usually involved macho 4×4’s and big aerials, the Hardmoors checkpoints were far less ostentatious and went on, one assumes, all the way to Helmsley. This didn’t stop me utilizing both race’s checkpoints and nicking a Hardmoors Jelly Baby or two.

In the end I got so diverted, literally, with the Hardmoors event, taking photos and recognising runners, that I missed my turn. I suddenly realised that I had gone way beyond the turn-off for my final control and once more had to take a detour through the heather. Before long I was back in Swainby and having a nice plate of chilli while the Hardmoors guys and gals still had another 30 miles or so to go. It made my (shortened) 22 miler seem a bit pathetic. Still, I was quite happy as I’d not managed to get the training in that I’d have liked and I wasn’t feeling too bad. My time was slower than last year but my position was the same. 55th!

It’s a real pity that two years on the go that this race has clashed with the last Cross-Country of the season – I don’t know if this happens every year. But if you ever fancy a run with a bit of map reading then this is an event to consider. Navigation is straightforward, and it is a very sociable event. In fact it’s fair to say that solo runners like myself are in a minority; most people tend to walk or run round in chatty groups. If you like Swaledale, you’d almost certainly like the Cleveland Survival.